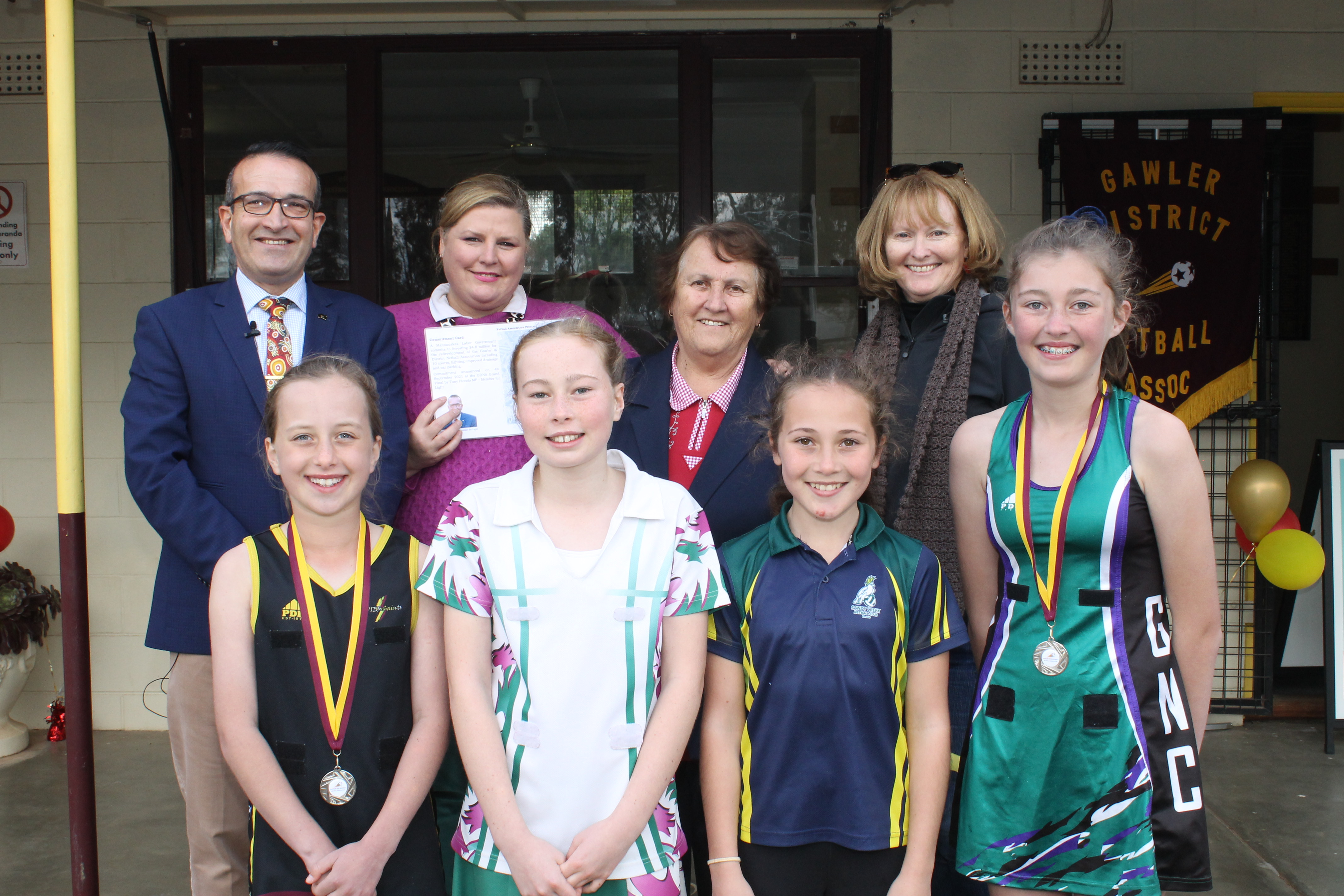 Thousands of local girls and women from across the Barossa, Adelaide Plains and Gawler region will benefit from a Malinauskas Labor Government commitment to invest $4.8m for ten new netball courts for the Gawler and Districts Netball Association (GDNA).

Making the announcement at the 2021 GDNA Grand Final on Saturday 4 September local State Member of Parliament, Mr Tony Piccolo said he was thrilled to be able to say that a Malinauskas Labor Government will provide $4.8m for the Netball Centre Redevelopment project to create 10 new courts. The local community and council have been lobbying for new courts for a long time.

“The State Labor Opposition has recognised that Gawler is a major regional netball centre however the aged and unsafe facilities are limiting the use, equitable participation and ability to host state level games,” said Mr Piccolo.

“Providing access to high quality netball facilities that meet the needs of our growing community is critical for greater opportunity for participation in sport.”

“The upgrade will include efficient LED lighting for all courts, new shelter, disability access, correct run off distances and improved drainage on the courts and larger car park.”

“The new courts will support the Netball SA requirements for a regional facility and Gawler’s ability to host state level competitions.”

Gawler is one of the fastest growing areas in the State and the State Labor Opposition has recognised that its sporting facilities need to be upgraded to meet current and future demand.

This project will support growth of one of the region’s most popular sports, as well as growth of the Gawler and Districts Netball Association and their clubs.

Mr Piccolo said the Gawler and District Netball Association has a rich history dating back to the 1930’s.

“One only needs to walk into the clubrooms and admire the long list of club names on the Honour Board to recognise that GDNA has been a constant for many girls, women and their families in the community,” said Mr Piccolo.

“Many schools also started their netball programs with GDNA such as Gawler Primary School, St Jakobi and Trinity College. St Joseph’s grew and developed into Xavier College, who continue with a large member base.”

“Today, GDNA coordinates netball over the entire year, with the traditional winter season played on Saturday’s and twilight netball (which was introduced in 1983) played during the summer, recently expanding to two nights a week.”

Over a thousand girls and young women play in the GDNA competition annually across both winter and summer.

GDNA President Kylie Forby said, “Gawler and Districts Netball Association are grateful and excited by the pledge from SA Labor to support the growth of our association with new facilities, which will reward the thousands of women and girls in the community who continue to contribute to one of the most popular sports in Australia.”

Mr Piccolo said taking into account the geographic breadth of teams involved, this investment by a Malinauskas Labor Government will be a huge win for the whole region, including Gawler, the Adelaide Plains and the Barossa.

A Bill to create an inquiry into the palliative care system in South Australia will soon be introduced into State Parliament. The Bill will be introduced by the Member for Light, Mr Tony Piccolo who raised concerns about the current state of palliative care services during the voluntary assisted dying debate.
Read Article

A Glimpse Into The History Of The Gawler-Angaston Railway Exhibition

An exhibition providing a “glimpse into the history of the Gawler to Angaston Railway” has opened in the LEO Gallery in Gawler. The exhibition has photographs, objects and artefacts loaned and donated by the community and community organisations to commemorate the 110th anniversary of the opening of the Gawler-Angaston train line. The gallery is sponsored by Member of Parliament, Mr Tony Piccolo and is located at 148 Murray Street Gawler.
Read Article

The local Afghan Community in the South East have told State Members of Parliament of their fear for the safety and wellbeing of family and friends living in Afghanistan following the withdrawal of allied forces and the installation of a new Taliban Government.
Read Article
About
About TonyParliamentary PositionsProfessional ExperienceLabor MovementThe Early DaysLight Electorate AreaTestimonials
Community
Tony in the CommunityCommunity & NFPsSchools & YouthSeniorsBusinesses
Services
Light Electorate OfficeHub 148Justice of the Peace
Parliament
Tony in ParliamentSpeechesQuestionsBills
News & Events
NewsEnlightenedEvents
Volunteer
Volunteer Application
Contact
Contact Details(08) 8522 2878light@parliament.sa.gov.au