Local News
Budget
Community
Gawler
Light Electorate
Tony Piccolo MP
Two reserves within the Gawler Council area will receive upgrades to improve community safety for the playgrounds located in them, if Labor is elected to government at the 2022 State Election. 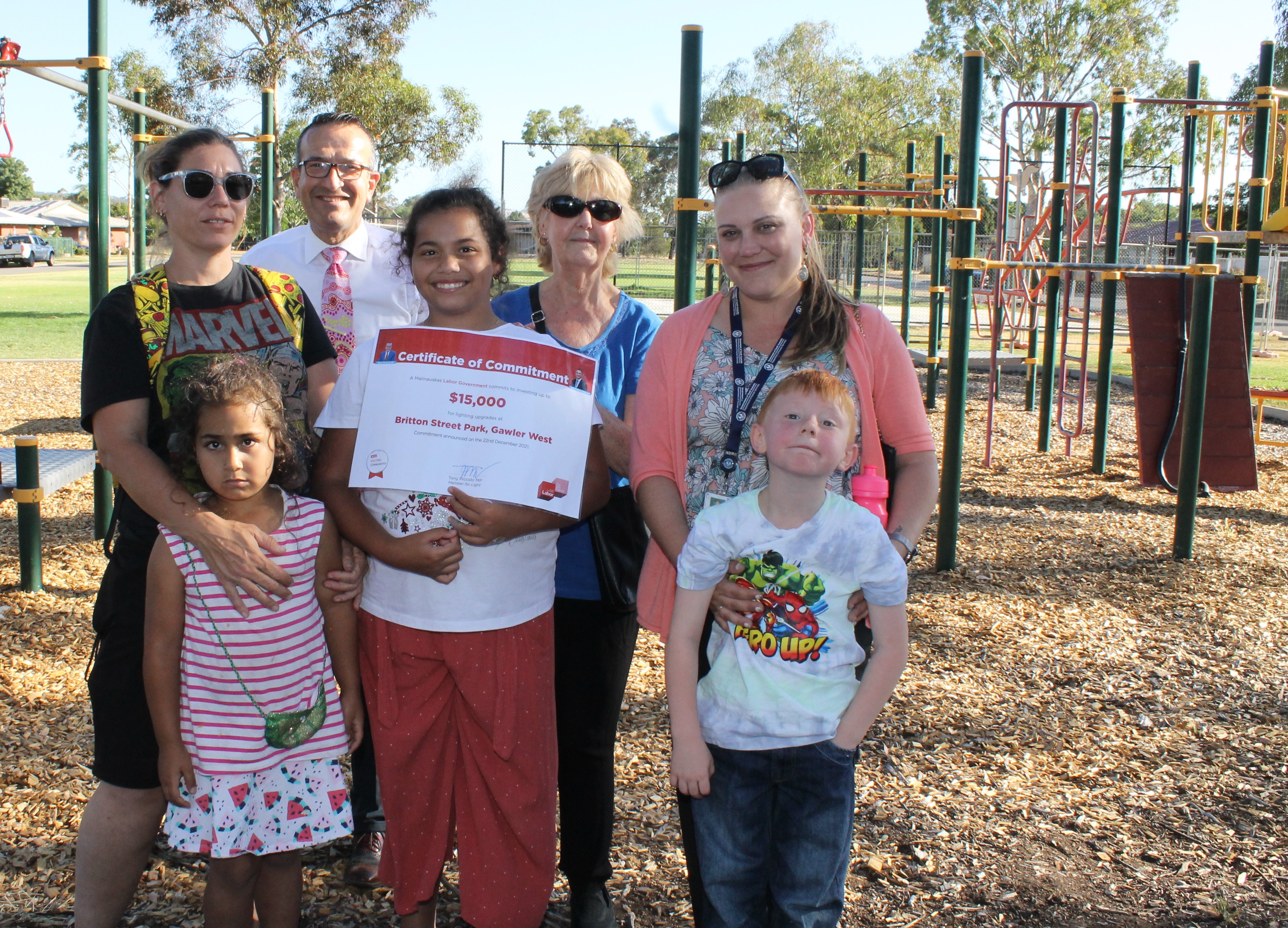 Local MP Tony Piccolo with some residents at the Gawler West Reserve in Brigalo Street.

Two reserves within the Gawler Council area will receive upgrades to improve community safety for the playgrounds located in them, if Labor is elected to government at the 2022 State Election.

The Bacton Street Reserve at Evanston will receive an infrastructure upgrade to improve lighting and sun safety through the provision of shade sails over the playground equipment.

In Gawler West, the play area at the intersection of Brigalo and Britton Streets will have lighting improved on the reserve at the cost of $15,000.

The proposed investment in community safety was announced by local Member of Parliament, Mr Tony Piccolo during “community conversations” he was holding in the two areas just prior to Christmas.

Mr Piccolo said the child safety matters were raised with him by local residents during community events held by Hope Chapel.

“During the year Hope Chapel visited either site on a monthly basis with their food truck,” said Mr Piccolo

“Bringing people together through a shared meal is a great way to build community and improve community connections.”

“While at the food truck visits, I was asked if lighting on the reserves could be improved to support community events in the localities,” said Mr Piccolo.

“We are also more aware of sun safety, so the sail shades will help keep our kids safe while they play.”

Mr Piccolo said sail shades won’t be provided at the Gawler West Reserve as Council had advised him that the playground was due for a major upgrade soon.

“Hopefully, the upgrade will include sun safe measures.”

“Modest investments like the two I have announced can certainly improve the quality of infrastructure in an area and hopefully encourage more use of our reserves.”

“Importantly, these two improvements were suggested by residents who live in those areas.”

A former teacher at Evanston Primary School, Mrs Anne Hausler has called for the placement of a plaque or something similar to mark the location of the former school which is now a residential development.
Read Article

The playground at the Nolan Street Reserve in Munno Para is set to be made sun safe if Labor are elected to Government at March 2022 State Election.The commitment was announced on Saturday, by local Member of Parliament, Mr Tony Piccolo as part of the ‘community conversations’ he held throughout the Munno Para and Munno Para West areas.
Read Article
About
About TonyParliamentary PositionsProfessional ExperienceLabor MovementThe Early DaysLight Electorate AreaTestimonials
Community
Tony in the CommunityCommunity & NFPsSchools & YouthSeniorsBusinesses
Services
Light Electorate OfficeHub 148Justice of the Peace
Parliament
Tony in ParliamentSpeechesQuestionsBills
News & Events
NewsEnlightenedEvents
Volunteer
Volunteer Application
Contact
Contact Details(08) 8522 2878light@parliament.sa.gov.au