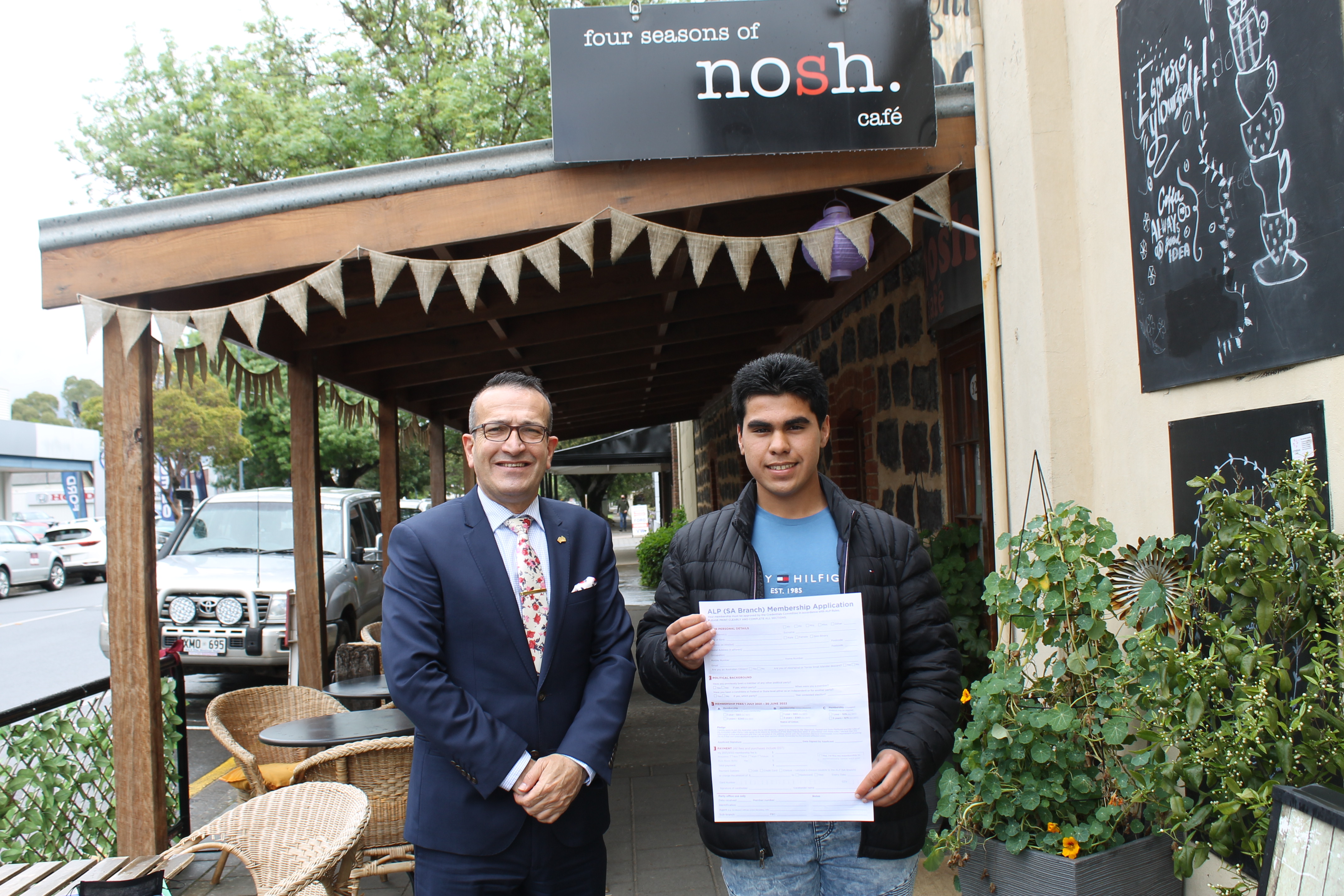 The way the Federal and State Liberal parties are governing, has prompted local Tanunda youth, James Rothe to join the Australian Labor Party.

The 17-year-old, Year 12 Nuriootpa High School student plans to study International Relations and Political Science at university when he graduates later this year.

Mr Piccolo met with him recently and asked him why he wanted to join the party, with James responding by saying “he wanted to make the country a better and fairer place.”

“It is great to see young people not only caring about our country but also prepared to take action,” said Mr Piccolo.

Born and bred in Tanunda, James told Mr Piccolo that he keeps up to date with current affairs by reading, but now wanted to do more, and decided the best way to do that, was to join the party that reflects his values.

“James said while his mum and dad are labor supporters and politics was regularly discussed at home, he is the first in his family to join a political party,” said Mr Piccolo.

James attended Redeemer Lutheran School and is completing his secondary education at Nuriootpa High School and plays football for the Tanunda Football Club under 17s team.

Asked what his family and friends would say when they find out he has joined the Labor Party, James said his family would be very supportive and his friends “would not be surprised”.

“We don’t discuss politics a lot at school, but most my friends know my views on a range of issues and my bias towards the Labor Party,” said James.

Mr Piccolo welcomed James’ membership of the party saying, “we need to continually develop the leaders of the future, and the input of young people is important.”

“Young people sometimes think that political party membership is for older people, but 14 years is the minimum age to join the Labor Party.”

“I was 19 years old when I joined the Labor Party and have never looked back.”

“It has given me many opportunities to serve my community and learn about how governments work.”

Mr Piccolo encouraged any person, young or older who would like to join the Labor Party to contact him on 85 222878 or email him at light@parliament.sa.gov.au

A former teacher at Evanston Primary School, Mrs Anne Hausler has called for the placement of a plaque or something similar to mark the location of the former school which is now a residential development.
Read Article
About
About TonyParliamentary PositionsProfessional ExperienceLabor MovementThe Early DaysLight Electorate AreaTestimonials
Community
Tony in the CommunityCommunity & NFPsSchools & YouthSeniorsBusinesses
Services
Light Electorate OfficeHub 148Justice of the Peace
Parliament
Tony in ParliamentSpeechesQuestionsBills
News & Events
NewsEnlightenedEvents
Volunteer
Volunteer Application
Contact
Contact Details(08) 8522 2878light@parliament.sa.gov.au