Local News
Budget
Community
Gawler
Light Electorate
Local Infrastructure
Parliament
Tony Piccolo MP
The playground at the Nolan Street Reserve in Munno Para is set to be made sun safe if Labor are elected to Government at March 2022 State Election.The commitment was announced on Saturday, by local Member of Parliament, Mr Tony Piccolo as part of the ‘community conversations’ he held throughout the Munno Para and Munno Para West areas. 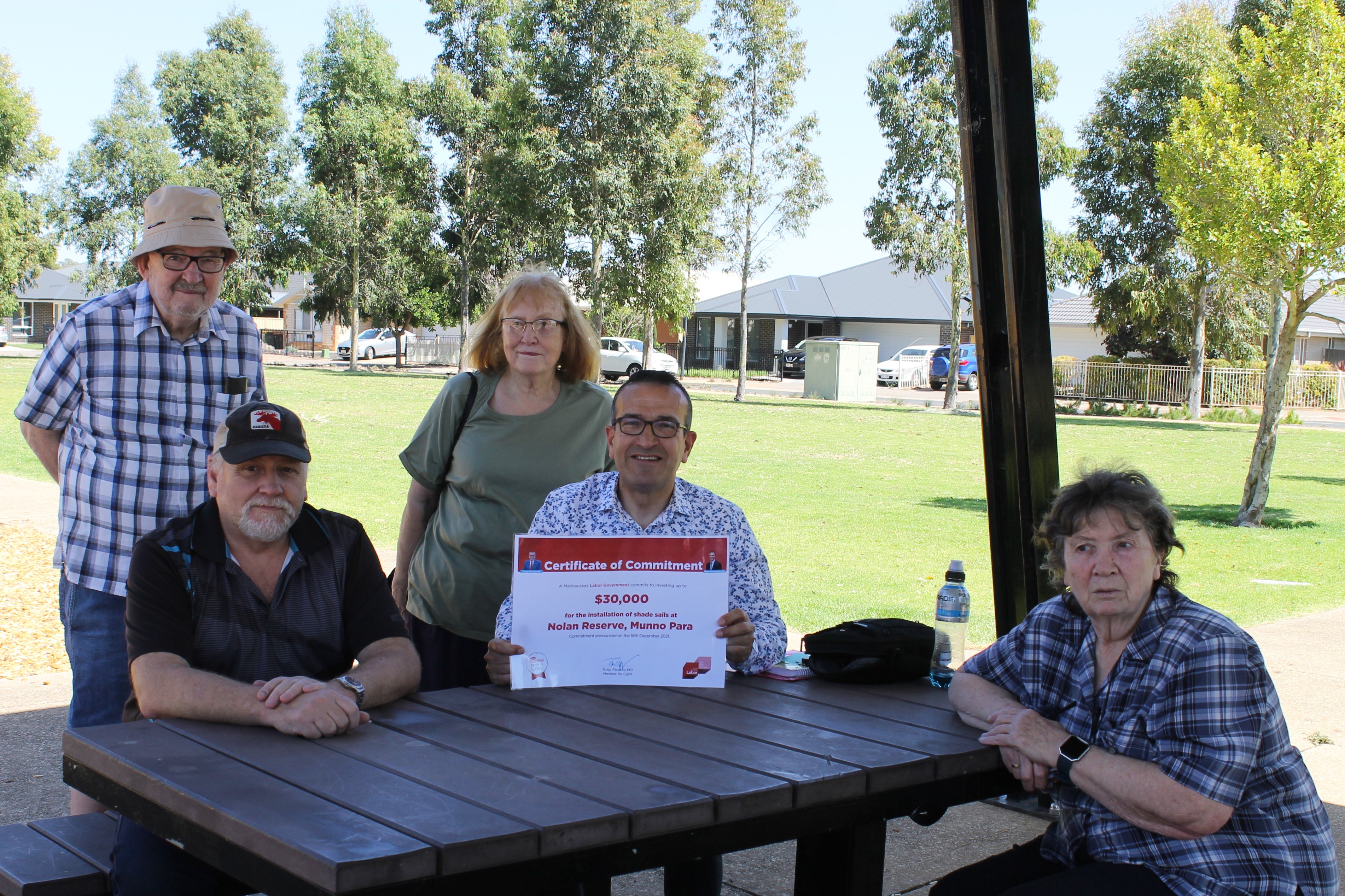 The playground at the Nolan Street Reserve in Munno Para is set to be made sun safe if Labor are elected to Government at March 2022 State Election.

The commitment was announced on Saturday, by local Member of Parliament, Mr Tony Piccolo as part of the ‘community conversations’ he held throughout the Munno Para and Munno Para West areas.

Mr Piccolo said a Malinauskas Labor Government will invest up to $30,000 to provide shade cover over the playground equipment at the reserve.

“We have a better understanding of the dangers of spending too much time in the sun, so if we want kids to remain active, we need to provide sun safe playgrounds,” said Mr Piccolo.

“Apart from the sun safe issue, equipment in the direct sun can get very hot and could hurt some children.”

“Playgrounds should be a safe and enjoyable place for the whole family, and this shade cover will make the reserve more pleasant,” said Mr Piccolo.

Mr Piccolo said local residents raised a number of other issues at the “community conversations”, with traffic congestion on Curtis Road, school traffic chaos near Mark Oliphant College, hoon driving, ambulance ramping and the health system, and the lack of public transport high on the list of grievances.

Mr Piccolo said that earlier this year he wrote to the Minister for Transport, the Hon Corey Wingard, seeking information about when public transport services would be extended into the new areas of Munno Para and Munno Para West.

“For some residents the closest bus stop is up to 1 km away which effectively makes the service inaccessible to many people who can walk such long distances, while try to carry the shopping.”

“Under the transport department own guidelines bus stops should be no more that 500 metres away, with 400 metres preferred to ensure they are accessible to those most in need.”

“Sadly, the Minister seemed to show little interest in fast tracking any new bus services to the area.”

Mr Piccolo said he was concerned that traffic around Mark Oliphant College (MOC) would be much worse next year with the influx of an additional 200 year 7 students.

“I am currently having discussions with the Council and other parties to see what options might be available to make a real difference to the MOC traffic issues.”

“While drivers doing the right thing would help, the long-term answers lies in reducing the traffic along Douglas Drive.”

“Curtis Road will require the three levels of government to work together to resolve the congestion issues, including an overpass over the railway line,” said Mr Piccolo.

A former teacher at Evanston Primary School, Mrs Anne Hausler has called for the placement of a plaque or something similar to mark the location of the former school which is now a residential development.
Read Article
About
About TonyParliamentary PositionsProfessional ExperienceLabor MovementThe Early DaysLight Electorate AreaTestimonials
Community
Tony in the CommunityCommunity & NFPsSchools & YouthSeniorsBusinesses
Services
Light Electorate OfficeHub 148Justice of the Peace
Parliament
Tony in ParliamentSpeechesQuestionsBills
News & Events
NewsEnlightenedEvents
Volunteer
Volunteer Application
Contact
Contact Details(08) 8522 2878light@parliament.sa.gov.au