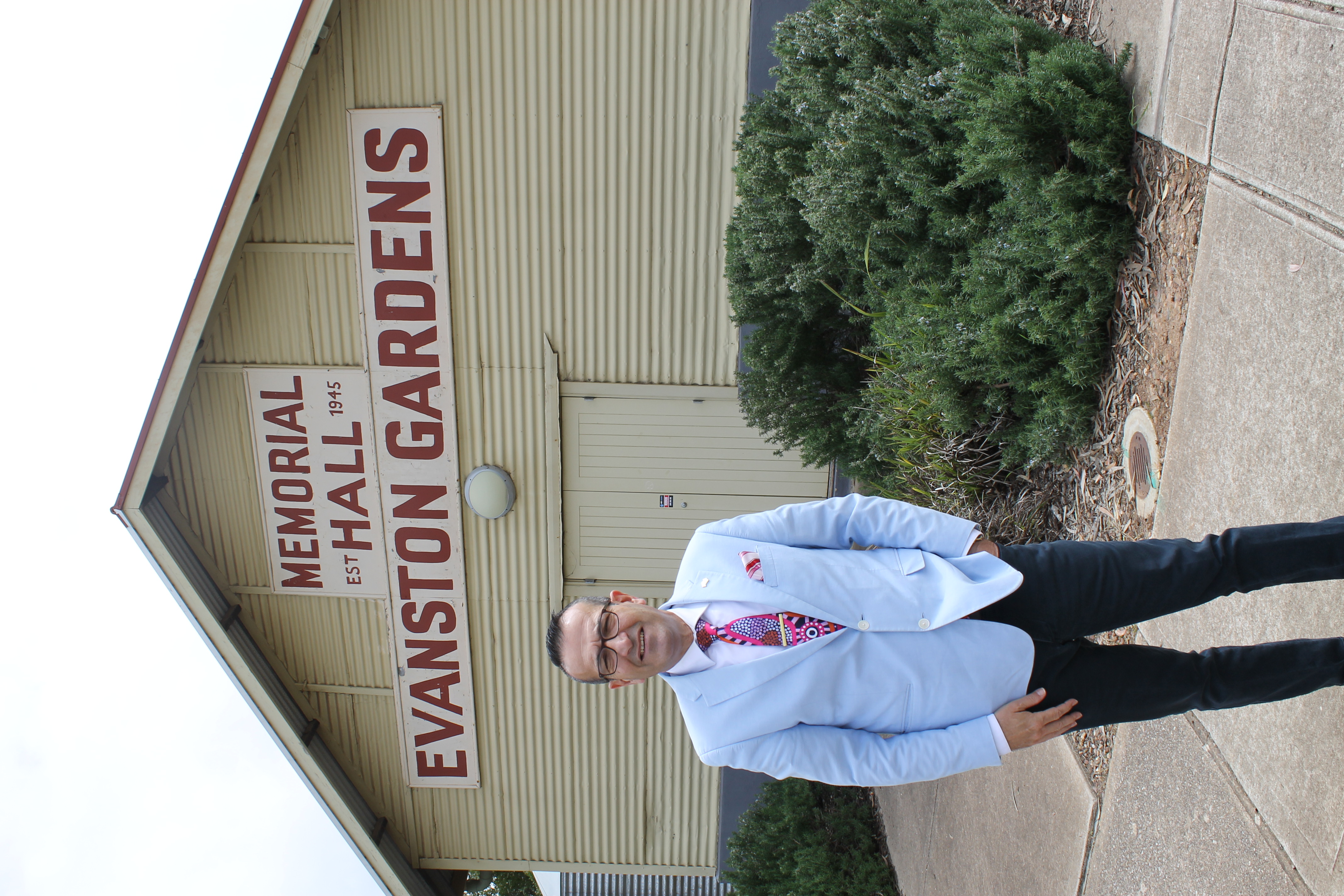 Local MP Tony Piccolo outside the Evanston Gardens Memorial Hall where he held his first community forum/meeting 40 years ago.

Mr Piccolo started his public life as a councillor on the (then) District Council of Munno Para where, as a 21-year-old, he was elected as a councillor for Evanston Ward on the 3rd October 1981.

In 1985 the ward Mr Piccolo represented was substantially transferred to the Town of Gawler as a result of a parliamentary enquiry into the boundaries of the council area. The Evanston Ward included the areas of Kudla, Hillier, parts of Evanston, Evanston South, Evanston Park and Evanston Gardens.

With the exception of Kudla and Evanston South, Mr Piccolo has represented the other areas for 40 continuous years in various roles, including councillor, alderman, Mayor and currently as a local Member of State Parliament.

Mr Piccolo supported the changes as he believed the people in those areas held a strong “community of interest” with Gawler, but his support for the boundary changes put him offside with most of colleagues on the Munno Para Council.

“The early years were interesting, but tough as I was the new (and relatively young) boy on the block my views were not always well received,” said Mr Piccolo.

“I was about 15 years younger than the next youngest elected member.”

Mr Piccolo was elected to the Gawler Council in May 1985 as an alderman topping the vote for the three positions.

Mr Piccolo said he certainly faced a steep learning curve, and when the boundaries changed and he joined the Gawler Council, he had to learn a whole lot more.

“I was motivated to run for Council as my local community didn’t believe they had either strong or effective representation,” said Mr Piccolo.

“It certainly has been an honour to represent my local community in both local government and state parliament.”

“I have been very blessed with a very supportive community who have not only provided electoral support but have also worked alongside me.”

“Being able to represent a community you have grown up in is certainly an advantage as you have a deep understanding of the needs of the local community.”

Mr Piccolo held the position of Deputy Mayor of the Town of Gawler for about 10 years and then went on to be elected the Mayor of Gawler in 2000 and was re-elected to the position in 2003.

He then successfully ran for State Parliament in 2006 and was re-elected at the 2010, 2014 and 2018 elections.  He faces re-election in March next year. He also served as a Cabinet Minister in the portfolios of communities and social inclusion, volunteers, youth, police, corrections, emergency services and also disability.

“I was honoured to serve in the disability portfolio at the time when the National Disability Insurance Scheme was being rolled out across Australia. The scheme has provided vital support to people living with a disability, and their families, enabling them to live with more comfort, choice and dignity.”

“I have at all times tried to work alongside local people, as I believe by that by combining our efforts we can achieve more.”

When asked about his achievements, Mr Piccolo said that was for others to assess and make a judgement about.

“Often in public life it is those small things you do that make a huge difference to the lives of other people.,” said Mr Piccolo.

“I hope people have found me accessible and believe I have listened to them. Sometimes people just want an opportunity to tell their story and want to be reassured that their voice has been heard.”

Mr Piccolo is thankful for the support he has received from family and friends, and those who have supported him over the 40 years.

“The reality is you do not achieve things by yourself, and it is the support you receive from others that make things happen,” he said.

“I am as enthusiastic about my public role today as I was 40 years ago as young 21-year-old. There can be no greater honour than to serve your local community.”

Mr Piccolo said he would be marking the occasion with small event with his extended family.

More biographical details about Tony can be found at https://www.tonypiccolo.org/about#tony-piccolo

The exhibition providing a “glimpse into the history of the Gawler to Angaston Railway” will now move on to be showcased in the Barossa from sometime in November.
Read Article