Local News
Barossa
Tony Piccolo MP
Gawler
The exhibition providing a “glimpse into the history of the Gawler to Angaston Railway” will now move on to be showcased in the Barossa from sometime in November. 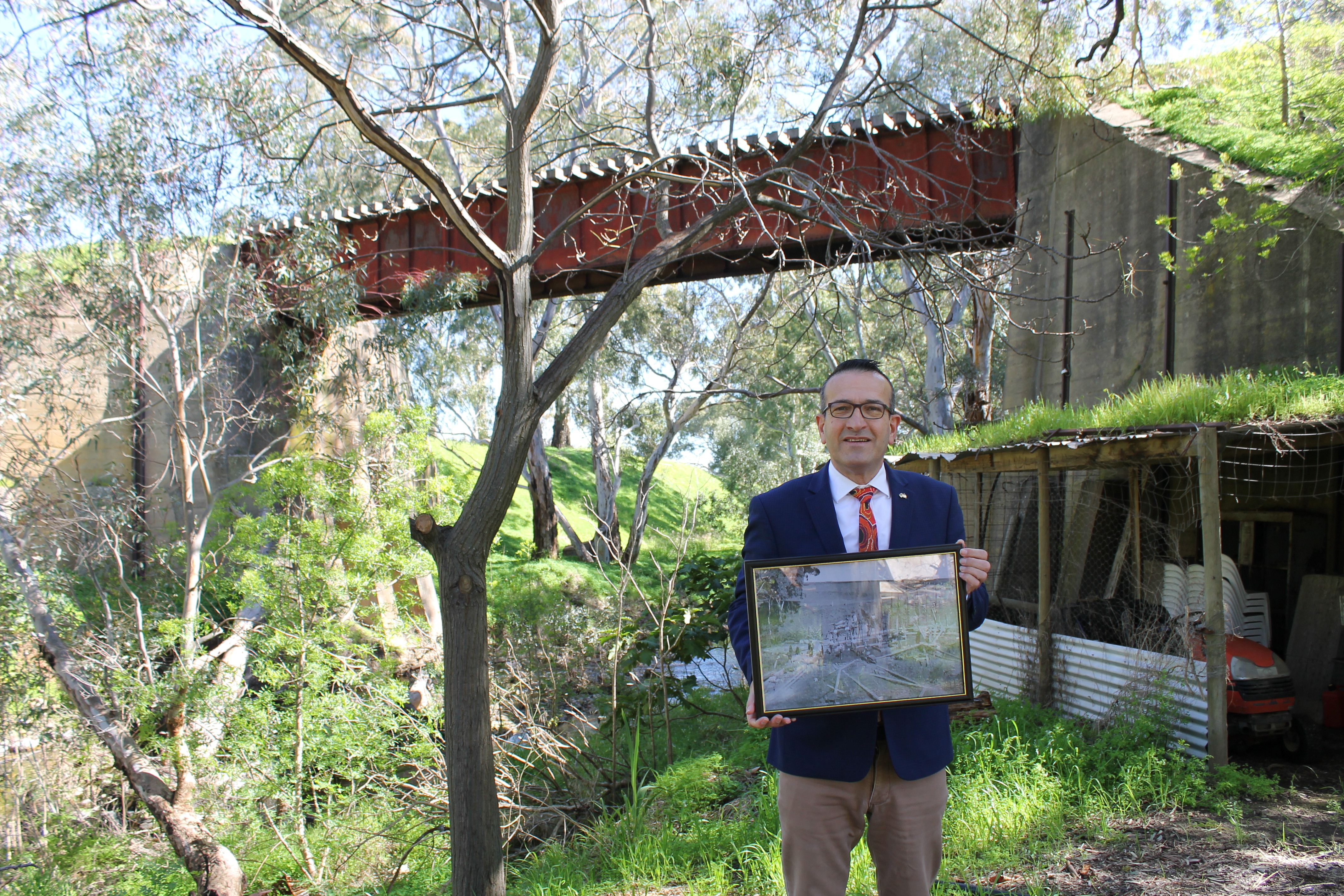 Tony Piccolo at the Jacob’s Creek railway bridge with the photo taken during the original construction, which is part of the rail history exhibitions

The exhibition providing a “glimpse into the history of the Gawler to Angaston Railway” will now move on to be showcased in the Barossa from sometime in November.

The exhibition has photographs, objects and artefacts loaned and donated by the community and community organisations to commemorate the 110th anniversary of the opening of the Gawler-Angaston train line has been on display in the LEO Gallery in Gawler sponsored by Member of Parliament, Mr Tony Piccolo located at 148 Murray Street Gawler, since early September.

“I would like to thank Barossa Mayor Bim Lange for showing such an interest in the exhibition and for making the offer to host the collection in the valley,” said Mr Piccolo.

Mr Piccolo said there has been state-wide interest in the exhibition and he is glad it will remain on public display for more people to see.

The current exhibition in the LEO Gallery has been extended to the end of October by popular demand.

Mr Piccolo said the aim of the exhibition is to bring to life the history of the line, and the people involved with it, to a new generation who may not be familiar with its history.

“I have been overwhelmed by the interest in the history of the line, which was not without controversy. In 1874 a Royal Commission recommend the building of a railway line into the Barossa Valley, yet by the 1880s still no action had been undertaken,” said Mr Piccolo.

“In 1889, the Hon. James Martin MLC, a resident of Gawler, moved a motion in State Parliament to get things moving in line with the recommendations of the 1874 Royal Commission, but it was not until 1897 that the first Angaston Railway Bill was introduced, which gave the opportunity for the Commissioner of Public Works to start gathering firm estimates for the construction of the line.”

The final Angaston Railway Bill was then passed at the end of 1909 to include the Angaston extension. Construction of earthworks began in September 1909 by the contractor Smith and Timms Co., which had won the contract to build the line.

Mr Piccolo said petitions both supporting and opposing the construction of the railway were lodged in State Parliament.

“Over the years the line enabled the transport of various goods including potatoes, and other produce grown in the Barossa Valley,” said Mr Piccolo.

“Very quickly after the official opening of the rail line, local businesses, clubs and organisations, plus the public, began to place more demand on the railway. Picnic trains were being organised, as were tourist trains by local wineries and children's parties and school outings.”

“During World War 2 soldiers were transported on the line because a military camp had been established at Sandy Creek.”

“The exhibition also pays homage to all the workers who used picks and shovels to construct the track.”